21/6/16  Taking advantage of the horrendous stair-rod rain last week, Peter and I have re-decorated the bedroom in Xidong.  We have more to do of course; the floor and screening around the over-large water hot water tank needed for the solar water heating system. There is a down side to every good intention!

The rain has also delayed shearing, which was going to happen 10 days ago.  Could be any day now - probably the one when we are busy with some other incredibly important job.

30/4/16  The second wave of lambing started two weeks ago on 17th April.  It is very slow, but so far we have had two lots of triplets and five lots of twins, with six more ewes to lamb.

That is the good news; not so good on the chick front.  One chick has not developed properly and has deformed legs.  A week ago, I moved them all into a stable in the barn (it is an american open-top loose box), taking note of the crows which nest up in the eves.  So I draped a tarpaulin over the bars thinking that would not only stop the chicks being so visible, but also stop the crows flying down into the stable.  In spite of my precautions five of the chicks have been taken, but not the crippled one; no sign of them anywhere - gone!  I can only assume it is the crows, their numbers are increasing year on year. 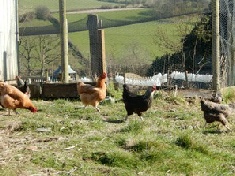 There have been some beautiful days of sunshine and very little wind.  Signs of spring are everywhere. 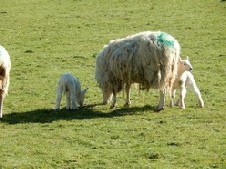 We have had the first of our lambs (a little earlier than expected), the daffodils have been out for some time now, but there is blossom on some of the fruit trees. 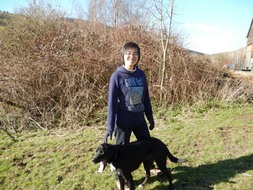 Yu, a lovely Chinese student, has been helping us over Easter with tidying the garden and looking after the animals.  Some of the shrubs are looking exceptionally de-nuded, but a LOT tidier! 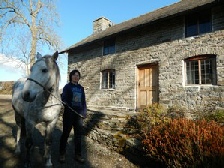 Another sign of spring is that I have successfully hatched seven chicks in the incubator.

So far we only have to protect them from the cats, which involve having to remember to keep the sitting room door shut!! 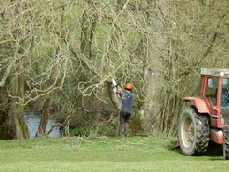 And finally, ten trees have been coppiced along the river bank, next job will be fencing them. 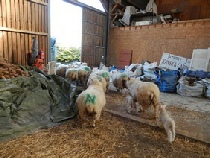 Last Tuesday, just as we were sitting down to supper, John our shearer rang and asked if we could get the sheep in before it rained so they could come and shear them in the morning.  So after we’d eaten, we donned wellies and with the help of the dog, rounded up the ewes and lambs; 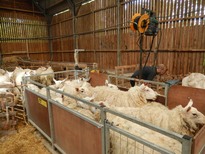 shouldn’t be a problem - most of the ewes like following someone with a bucket - but there is always one. I love sheep. The one I have in mind has three lambs and sadly is teaching them all she knows, like how to avoid getting CAUGHT. 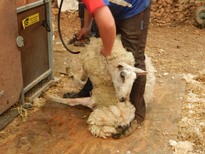 So after running up and down the bank in the field a few times, bringing the other ewes and lambs back to the field and this time making sure she was in the middle of the flock, we penned the bitches in the barn! I love sheep.  Next came the ‘Rabble’.They are the ‘other’ ones - even more anti-catching.  So, pens ready, all (most) exit routes blocked and Cyd (the horse) standing guard by the corner of the barn, 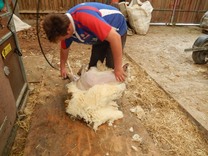 we got them out of the field - but they didn’t want to go into the barn - no way.  Cyd wasn’t any use at all as a sheep stopper and Jack’s not very confident in the face of determined sheep at the best of times. 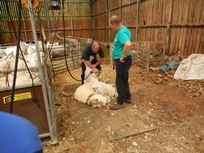 SO…. Yours truly runs around, yes RUNS around the long way to the other side of the house to cut off the fleeing bas…… sheep.

I ha..(sorry) love sheep.  With the aid of a stick, a lots of shouting, screaming and wailing to make myself seem like a sheep’s worst nightmare and Peter being the true shepherd (guide) with a bucket of food (I know that one - it’s just stones/pebbles) we coaxed, cajoled, forced and finally got the sods into their pen next to the ewes. I hate sheep!!

The darlings stayed in overnight, well penned, all the barn doors tight shut and the farm gate shut as a back stop.  When the shearers arrived it was a different matter however.  Some jumped out of the pens and others decided to practise mountain climbing on the bags of logs.  One even tried a bit of dirty fighting with the shearer, kicking him where she shouldn’t!  Well, they were shorn in the end and I don’t think they were in the least grateful they had had their coats removed.

Last week, our neighbour held to their promise to deal with the bottom end of our track.  It has now lost the deep lakes which were threatening to engulf my little car every time I drove through them!  Instead there is a section of neat, re-cycled concrete railway sleepers, which will last for years with no maintenance (we hope).  Other parts of the track have had their smaller potholes filled and levelled and although it is not quite all done, 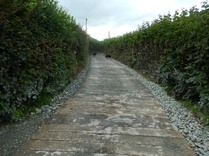 it is now possible to get up to the farm more comfortably. 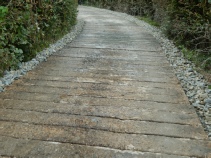 We have hatched more eggs and after losing all the previous brood, are now watching very carefully over these ones.  Pictures in due course. 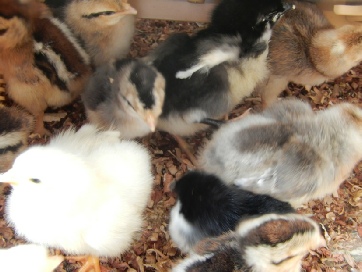 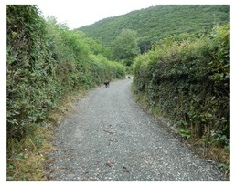 The pond in Xidong garden is a constant source of disappointment to our visitors.  It has, in it’s time been a lovely ornamental pond with suitable rushes and water plants, stone work and, before I moved to Squire Farm, it possibly had a water fall into one end.  Over the last four years, it has gradually developed a leak, which now means that the pond (never very deep) is now one to two inches of mud over it’s concrete bottom!  It is still home to frogs and newts.

There is no way of finding out where the leak is and plugging it, which would be the obvious solution and it may be that there are several leaks.  Maybe the best option will be to re-line the whole pond with black liner or fill it in as it fills with leaves in the Autumn, mud in the Spring and grows duck weed in the Summer!  So - until we decide what we can do with our ‘ornamental pond’ within a reasonable budget and given the man and woman power we have at our disposal, it will have to remain a mud haven for little water creatures - thus the ‘environmental’ description! 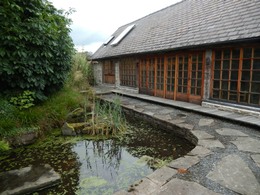 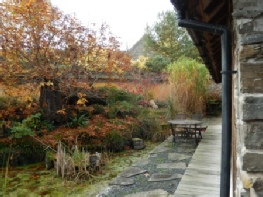